This is Bob Brown and his Bug.  He offered us a ride but there were already six passengers in the car.  We declined.

Once a week we had a day off.  Most everybody would take day trips to nearby cities by train from Aigle, some would hitch hike to other areas.   My first day off I caught the bus from Huemoz to Aigle.  I then caught the train to the closest city of Montreux.  Chateau Chillon which is a castle that dates back to 1005 AD is on the outskirts of Montreux.   This castle was built to control the road from Burgundy to the Great Saint Bernard Pass.  Chillon was made famous by Lord Byron who wrote a poem in 1816 called “The Prisoner of Chillon”.  This poem is about the Genevois monk, Francois Bonivard who was a prisoner in Chillons dungeon from 1532 – 1536.  The monk was chained and you can see the ruts in the rock floor where he walked and drug the chain for six years.  Lord Byron carved his name in a pillar in the dungeon that can also still be seen today.  Walking through the castle was sobering knowing of some of things take took place there.  I went to the dungeon and saw where Lord Byron carved his name in one of the pillars.  At the time, I did not know about the ruts in the floor where the prisoners paced so I did not pay attention to the floor.

The city of Montruex is a beautiful place as I remember.  Just off shore is where the pavilion was as made famous in the song “Smoke on the Water”.  The Grand Hotel where some of the rock performers stayed at that time was nearby and I got a picture of it.

Another favorite place that I visited later was Lausanne.  There was an open market there in one of the city squares that was fun to walk through.  I also went to Geneva by train.

On one of my day off, a group of us hitch hiked to a chocolate factory in Broc.  We pair off boy-girl since this way it is easier to get rides while hitch hiking.  No one will stop for two males and it is dangerous for two females to hitch hike.  My hitch hiking partner was Wendy who lived in the same Chalet as I did, so we were like brother-sister.  The group leader had estimated that it would take about 2 hours for each pair to make it to the factory.  We all started from different points in order to get rides quicker.  Wendy and I took the bus to Aigle and started hitch hiking from there.  Other pairs started from different places.  If I remember correctly, there were about 20 of us so there were 10 pair.

We caught our first ride fairly quickly.  The driver took us as far as he could and had to drop us off when he had to go another direction.  We caught several rides until about halfway there we ended up walking for about 30 minutes on a small two lane road where there was no traffic.  It started to snow but we kept walking.  Finally a car stopped and we got a ride to the next town.  As we were walking out of the town, no one was stopping to give us a ride.  A car hit a water puddle and Wendy got soaking wet from the splash.  That car stopped, backed up and offered us a ride, I guess he felt sorry for us since he hit that water.  He took us to all the way to the factory since he worked nearby.

When we walked up the factory, we noticed that there were most of the group already there.  It is interesting that we all arrived within 20 minutes and yet we saw no one else while we hitched.

The tour started with an introduction and an offer to eat as much chocolate as we could before we started walking through the factory.  The idea was if we ate chocolate before the tour, we would be less likely to grab chocolate during the tour.  At the end of the tour we were given a small bag of chocolates to take with us.

As we left the factory to make our way back to Huemoz we left in intervals and different directions.  Wendy and I decided to go towards a major highway thinking that we would have a better chance of getting rides that took us further.  Problem was, Hitch hiking on the Autobahn is illegal so we would have to catch rides before they entered the highway.  Our plan worked well since we did not have to walk very much.  At one point of our way back a red VW Bug stopped and asked if we needed a ride.  When we walked up to it we noticed that the driver was my roommate from L’Abri, Bob Brown. Bob is an interesting character who was from London, England.  We looked in the car and he already had 6 riders; that Bug was packed tight with people. We turned down the ride offer.

The one ride I remember well is when we caught a ride in a Porsche 928 which was a new model at the time.  I climbed into the back seat while Wendy sat up front.  When we got on the Autobahn, the driver said, “Sprechen Sie auch Deutsch” which means, “Do you speak German?” We said “No”.  Then he said “Parlez vous Français” which is “Do you speak French?”  We said “no”.  The he said in perfect English, “What do you speak?”  I said “We speak that really well” The driver laughed and said he was from New York and was in Switzerland on extended business.  That ride in the Porsche was a lot of fun for me since we rode in the fast lane of the Autobahn.  I looked at the speedometer and tried to figure out how many miles per hour was 195 kilometers per hour.   I finally figured it was a little over 120 miles per hour.  Gotta love a Porsche on the Autobahn!

We finally made it back to Aigle where we caught the bus back to Huemoz.  Once back at the chalet, I got a bowl of granola before going to bed.  What a fun and memorable day! 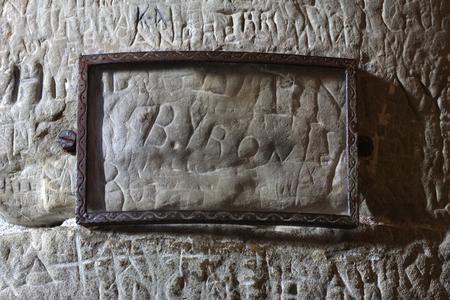 This is everyone from L'Abri who hitched to the factory. 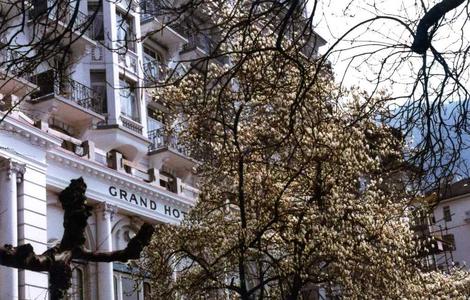 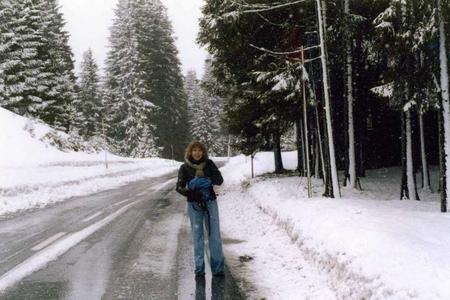 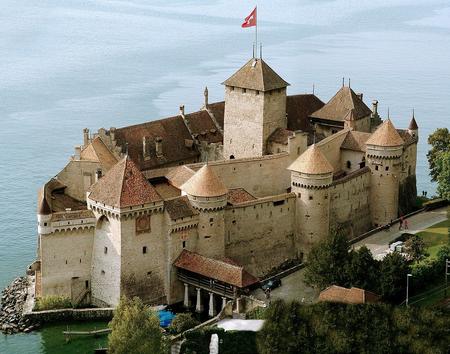 L'Abri: Our Days Off 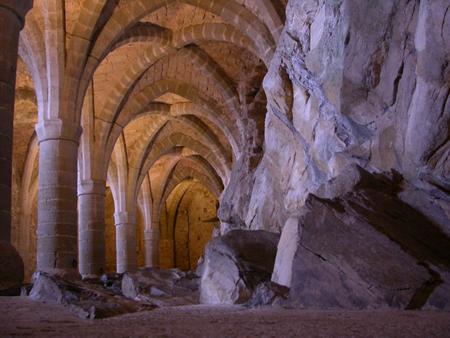 The dungeon in Chillon

This is Wendy, my hitch hiking partner to the Chocolate Factory.

Grand Hotel where some of the bands stayed where "Smoke on the Water" was inspired.

Lord Byron carved his name on a pillar in the dungeon. 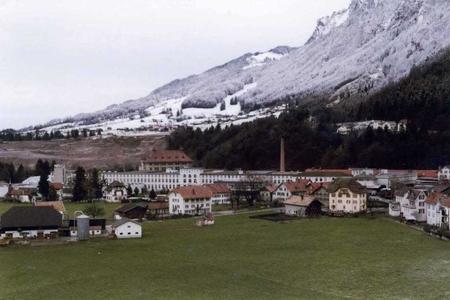 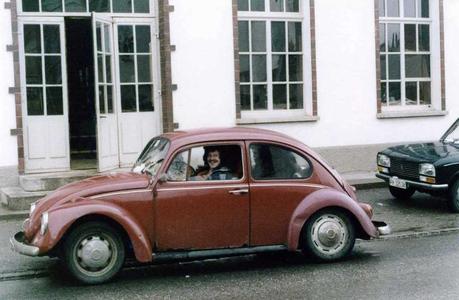 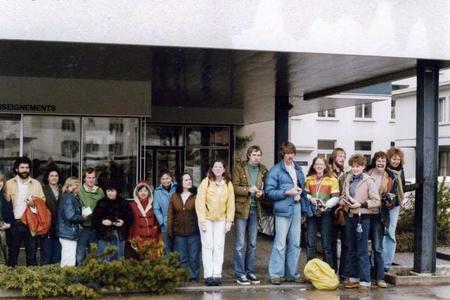