I had to use a turkey baster to measure the precise amount of oil to put into the Super Charger.

When torquing the new flywheel I used what I could find to hold the flywheel from spinning. This is a sway bar clip from a Jeep XJ I parted out a few years ago.  The holes lined up perfectly for the bell housing bolt and the dowel on the flywheel for the pressure plate. 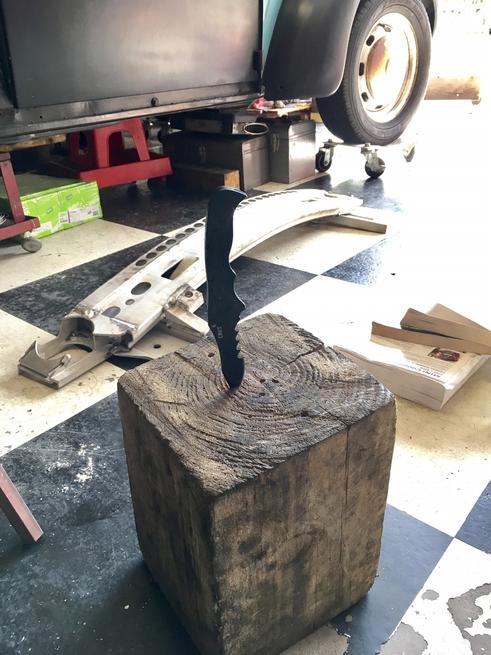 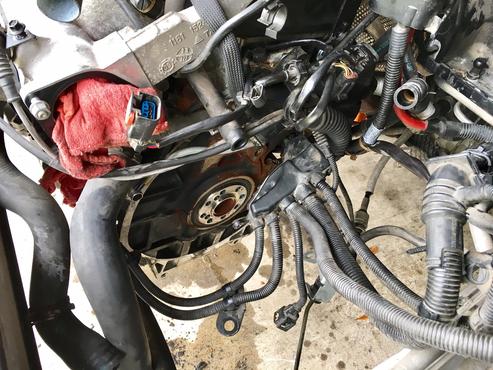 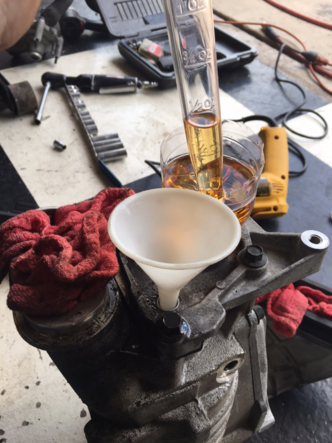 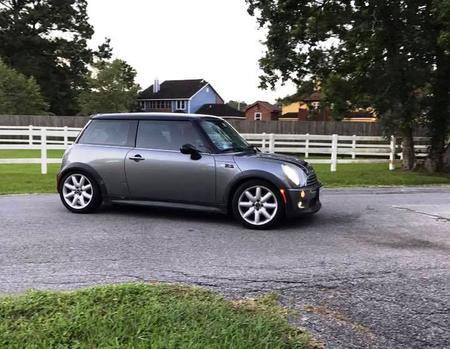 Up on the jack stands.  I made sure the car is solid on the stands for safety sake. 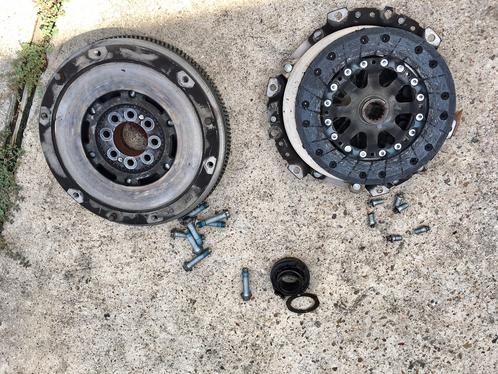 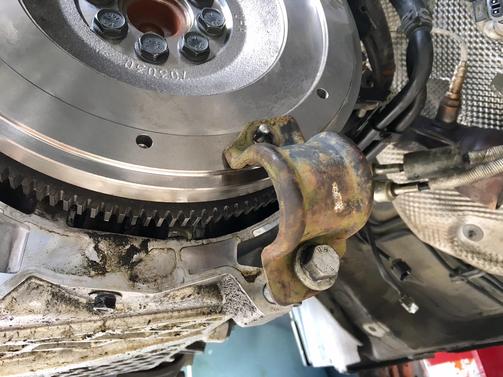 The actual replacement of the clutch and re-assembly is documented in this Youtube video.  I studied this many times while I worked through this project.  Lots of good and accurate information. 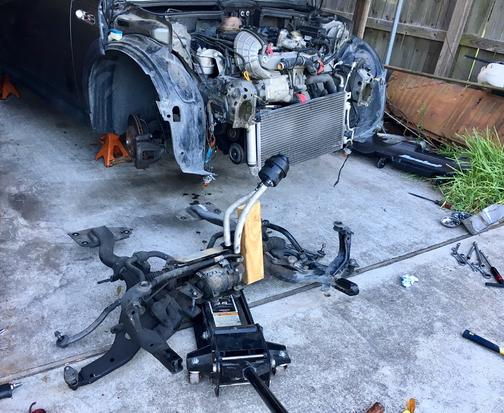 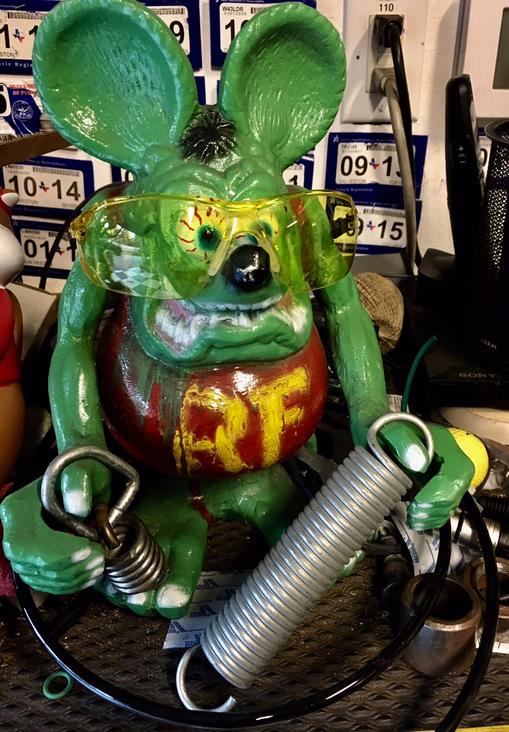 I always know where I left my safety glasses I wear while working in the garage.

Fink take good care of them while I am away.

If you are not bleeding, you are not wrenching.  I was not sure where the cut was I just saw blood on one of my wrenches.  It stopped bleeding after a while. 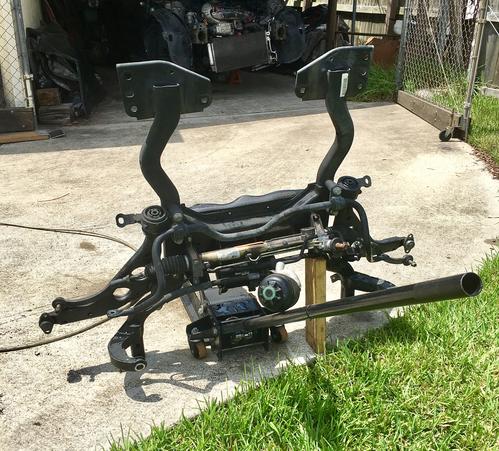 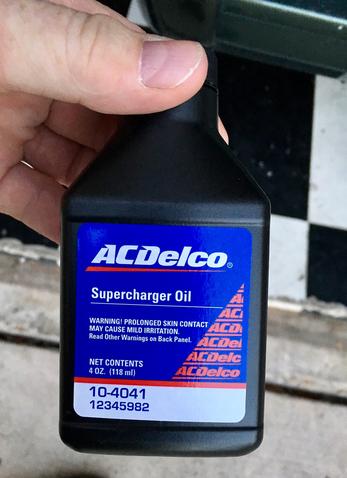 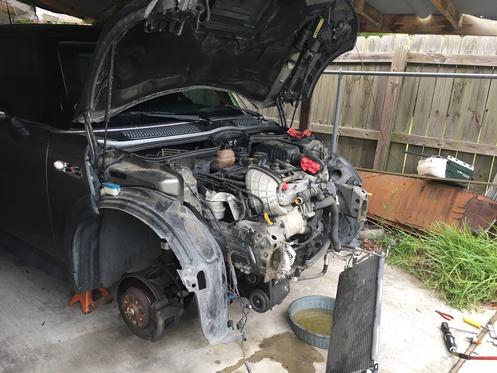 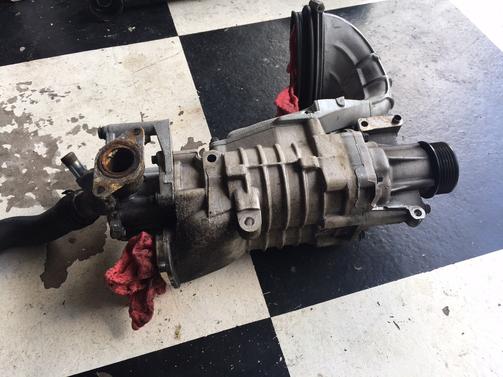 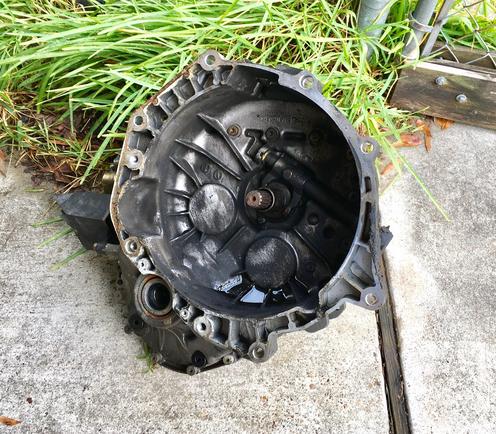 First day stopping point.  I am about 1/3 into the tear down.  So far everything is going well. 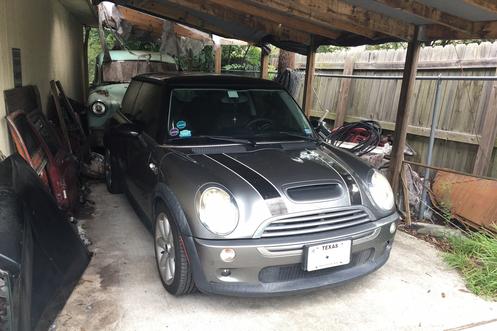 I got the sub-frame pulled out.  Not as difficult as it sounds.  While I have it out I will replace the two control arm bushings and clean up the frame.

The transmission is now out

Since it is so hot here in the Texas Gulf Coast, I can only work a few hours in the late day.  I water blasted the sub-frame to clean it up.  I also pulled the two most difficult bolt on the bell housing, the top two.  I knew going into this project that those two bolts would be the biggest challenge.  As they say, working a project like this is a 20/80 thing; 20 percent of the bolts will take 80 percent of your time.  I did not get any pictures of pulling the two bellhousing bolts but here is a shot of the sub frameafter cleaning it. 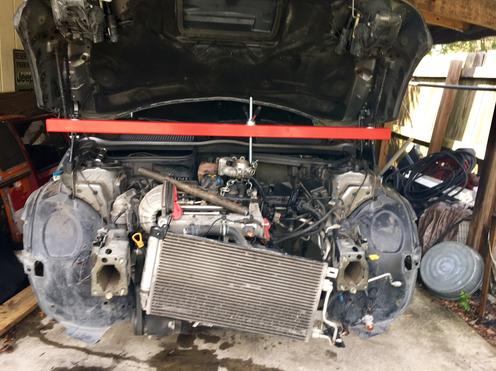 I am setting the Mini up on the side of the garage in front of the '53 Chevy Wagon to do the work.

Hot day to start work, but I am use to the heat. 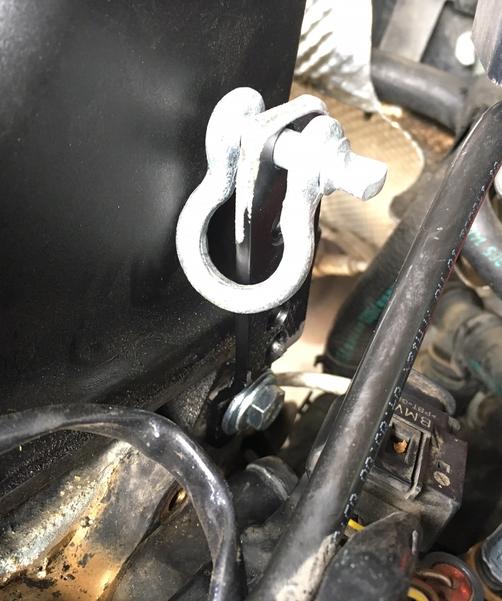 Will pulling out of the driveway to go to Baylor.  I talked with him after he got there and he said the Mini ran flawlessly.  I feel like we really accomplished something after all the work we did.

The engine support bar in place with a chain connected to the shackle, the transmission can be pulled free.

Replacing the Clutch in the Mini 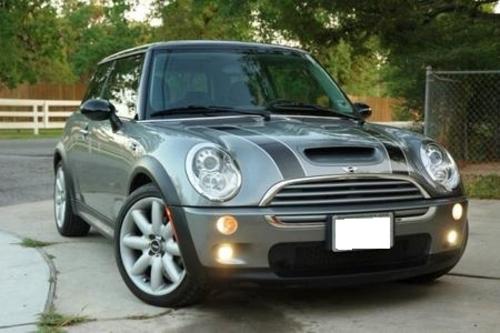 Will's 2006 Mini Cooper S needs a new clutch.  The clutch has started to slip in 5th and 6th gear when on the highway.  He could probably drive it for a few more hundred miles, but he goes back to Baylor in a few weeks.  So instead of waiting until it fails all together, he and I will replace it now.  I bought the Valeo Clutch kit from Detroit Tuner.  It is not a factory replacement but an upgrade to a single surface flywheel, clutch and pressure plate.  I will update this page as we progress with pictures to show how we did this repair. 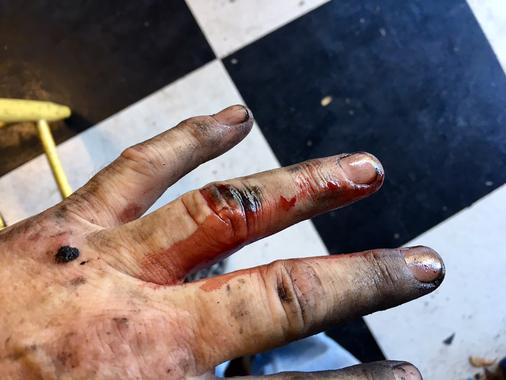 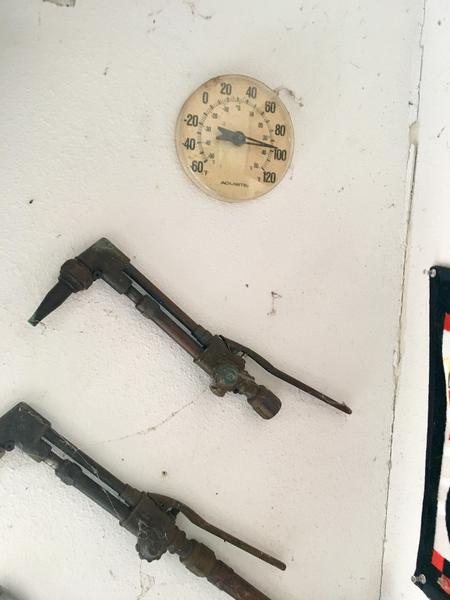 In the Texas August heat, I took a lot of breaks.  This was my point of view during most breaks.

In order to pull the transmission out, I had to support the engine.  I made a engine lifting bracket from a scrap piece of metal I had in the garage.  I bolted it to the right side of the head and added a shackle.

I ended up running too close to the deadline to get the Mini back on the road since Will needed to drive it back to Baylor.  I did not take any more pictures of the rest of the project.  Installing everything is basically the reverse of disassembling.  It was not difficult, just time consuming for me. I am glad I did this because it saved us a lot of labor money that a dealer or shop would charge. If I had to do it again, I would designate more time to work this. 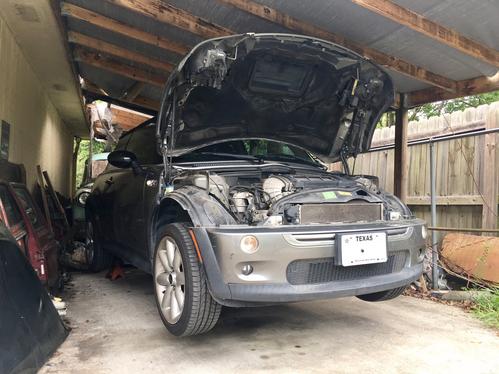 The biggest help for me is this youtube video.