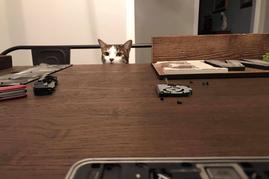 One day I was looking through the local pet adoption website. Most of the pictures posted are of dogs and cats posing to look their best. That makes sense since the agency is ‘selling’ these fine pets to be looking for their forever home. I came across a picture of a scared looking kitten, so I opened that link to see more about this young cat. The description was short and generic, and the only picture was the one I saw on the main page. I knew that I needed to save that little one and give her a safe and happy life.

That evening I told Jennifer about that scared looking cat. She responded, “Was it Madeline?” Apparently, she was looking at the same site that day. We were not looking to adopt another pet. We had three dogs in the backyard and Jasper ruled the house as our cat. Our daughter Allison was in Japan for a Study Abroad with Baylor. So, we decided that if Madeline was still available when Allison got back home, we would look into adopting that sweet looking kitten. Two weeks later Allison came home, and I called that day to see if Madeline was still available. She was, so we agreed to a time to meet at the home of the person who as the foster home.

We arrived at the home where the pet adoption person had the foster parent to meet us. Madeline was a playful kitten and we all fell in love with her. She came home with us and we had to take her to the adoption event a few days later in order to finalize the adoption. One of the workers took Madeline to the back to give her the last of her shots. I thought that was interesting since the cats we have adopted got their shots in front of us. I mentioned something about that, and the lady said, “Madeline is sort of drama queen. She will yell when given a shot and they did not want the people who were looking at the dogs and cats to hear it”. Jasper had a tough time in accepting Madeline, but they were soon good friends.  Madeline was indeed a drama queen, when Jasper wanted to play and it was not her idea, we all heard about it.

A couple of years later Allison adopted Vlad, a black kitten. Jasper and Madeline did not think it was a good idea to bring another cat into the house. That was the first time I heard Madeline growl. When she did that, we all looked at each other in surprise. We did not know that she even knew how to growl. It did not take long before all three cats were good friends. So now we have three dogs in the yard and three cats in the house. The boy cats loved to run and play in the house, but when they tried to get Madeline to play with them, she would yell. She indeed was a drama queen. She did play with them, but only if it was her idea.

Fast forward a few years, we were flooded during a hurricane. The water inside the house was waist deep and we knew we had to get out to safety. Jennifer and I got our john boat out onto the driveway tied to the fence. We needed to get our pets in the boat. We had lost Zora a few weeks earlier and Ginger had just drowned. Jennifer and I got Bella, our black lab into the boat which was no easy feat since the water on the driveway was chest deep. The cats were on the back of the couch, two of them still dry. Vlad had jumped into the water when he saw Bella in the house earlier. Allison got Vlad and wrapped him in a towel. The only way we could think of to get the cats into the boat was to put them into pillowcases. You have not lived until you have carried a cat in a pillowcase through chest deep water! We lived in six different places before we could move back into our house. Some for overnight, others for a few hours and others for weeks and months. All three cats and Bella were troopers. They adapted well but knew that things were not right. When we did move back into our house, it was still under construction. As the house evolved into our home again, all the cats enjoyed exploring the house after the workers left for the day. Vlad took the process a lot harder than Jasper and Madeline. He is still jumpy today when someone other than family walks into the house.

Of all our cats, the one who watched TV with us was Madeline. We have always had movie and pizza night every Friday. Madeline would get into the recliner with me but rarely in my lap. She would sit next to me as we watched the movie.

About the time we had to stay home all day due to the Coronavirus threat, Madeline would hide somewhere in the house. We did not think much of it since she was always a loner. I noticed that she seemed to be losing weight and we all noticed that she was not eating much. She would drink water, so we did not think anything was wrong. Jennifer got concerned that she may not be feeling well so she called our Vet. Our Vet was closed due to the Coronavirus since he was at risk due his health. He recommended a nearby Vet where we got an appointment. When we took Madeline for her appointment, we fully expected to get some antibiotics and she would be feeling better in a few days. We could not go inside the Vet due to the Coronavirus rules, so I left Madeline in her carrier near the front door. We communicated via phone. After they took her in, they said they would call when she was ready to go home. When we got the call, they said the blood work looked ok, but there was some concern since they felt what might be a mass and asked if they could do some X-rays. The results from the X-rays was not good. They found that she most likely had cancer in her intestines and her lungs had fluid in them. We had to make the tough decision to put down our sweet Madeline who was only seven years old.

We all wanted to good-bye to our sweety, but the Vet would only allow two people inside. They brought Madeline out to our car where we had to say good-bye. Someone said that the only hard time in owning a pet is the good-bye. That is a true statement. Jennifer and Allison went in to be with her when she went to eternal sleep.

We brought Madeline home to bury her in our backyard near all our other previous pets. Will and Allison and I took turns digging the final resting place near Annie and Ginger. We thought about putting her near Marie, our cat of 15 years, but there was no room. After we got the grave deep enough Jennifer placed our sweet Madeline in. The Vet had her in a box and had written the name Madeline on top. We each placed a flower on top of the box before filling in the dirt. We all said something and when it was my turn, I said “Sweet Dreams Drama Queen”. We all chuckled at that. We placed grates over the grave so no animal would try to dig in that place. Later I looked out of our bedroom window and saw a red bird sitting on top of her grave. My Mom has always said that when she sees a red bird, that is a reminder that God is near and providing comfort. When I saw that bird there, I knew all was good.

Jasper and Vlad are missing Madeline. Vlad keeps looking around the house and Jasper just looks sad when I pet him. We are thinking of adopting another cat soon, not to replace Madeline, but to fill the void of her not being here. I think back at the first time I saw the picture of that scared looking kitten, I know we provided her a safe full life, even if it was for only seven years. 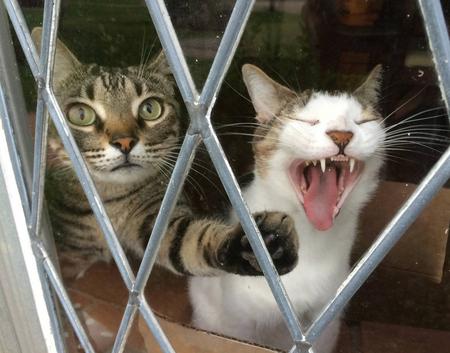 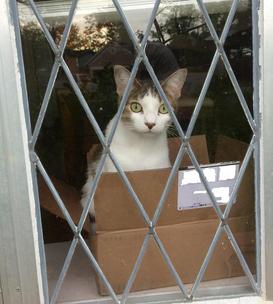 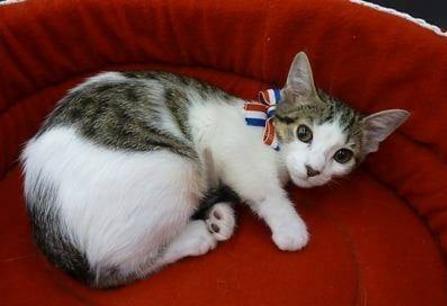 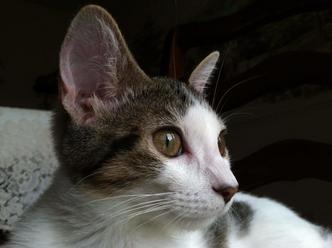 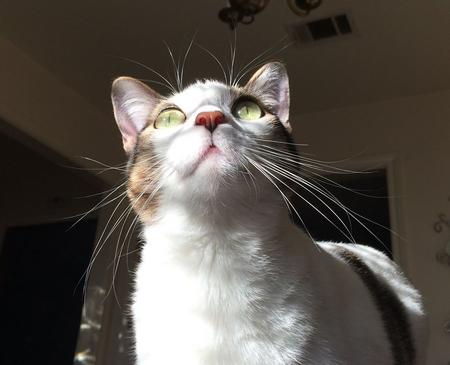 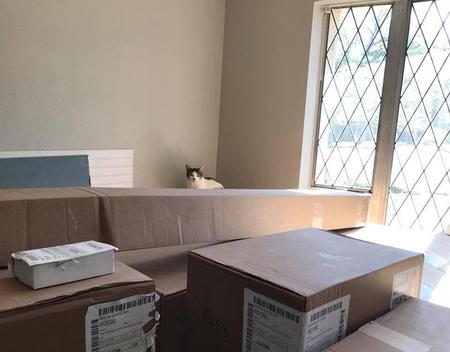 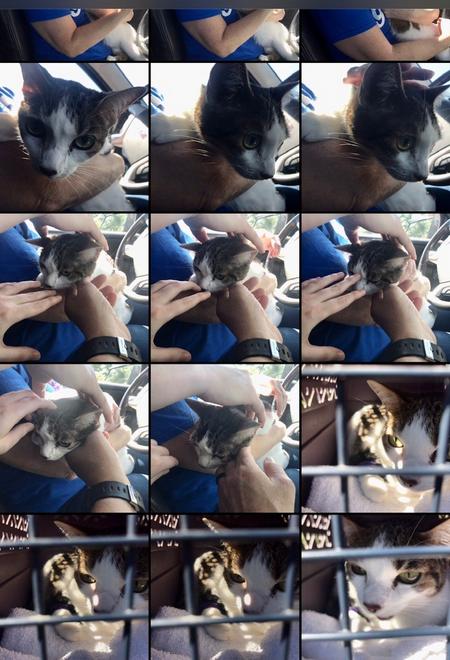 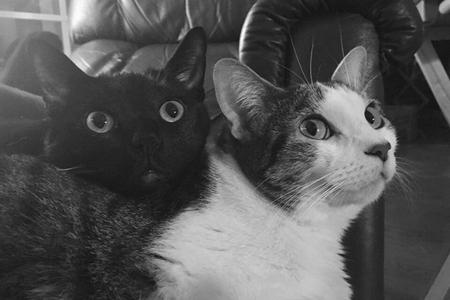 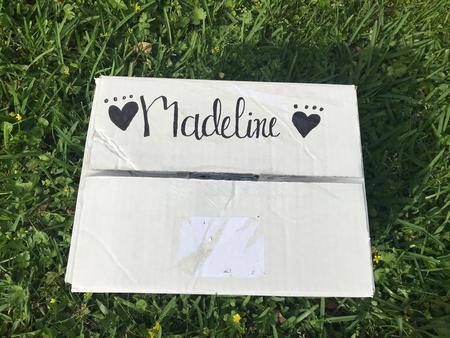 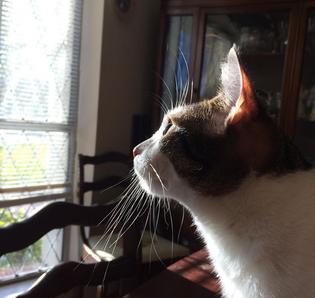 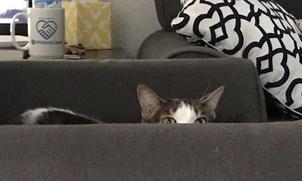 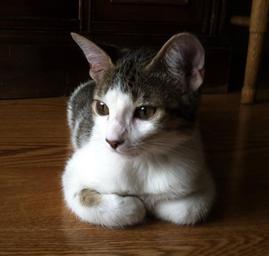 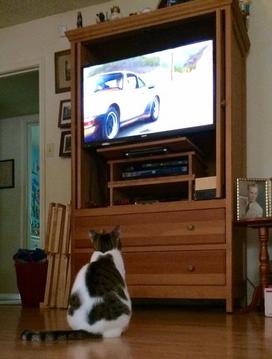 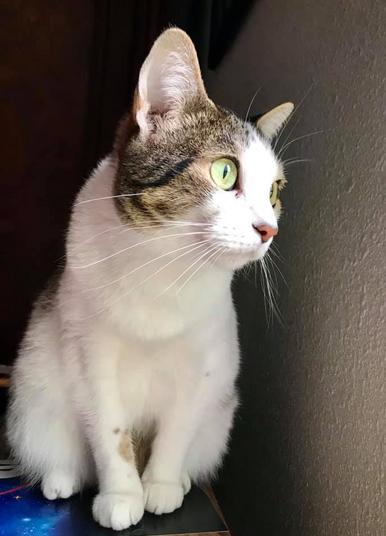