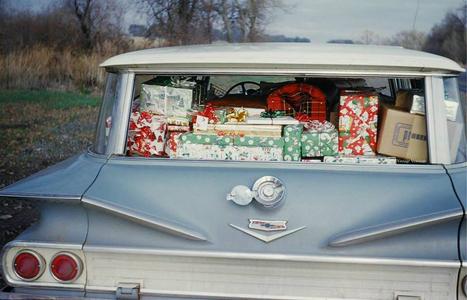 My first memories of going on vacations was from the back of a station wagon.  We lived near Houston, Texas and our grandparents were in Arkansas.  I recall the day school let out for Thanksgiving seeing our green 1960 station wagon pulling up to the school to pick me up.  The day had gotten cold and I could not wait to get inside the warm car.  Johnny, my older brother and Donny my younger brother were already in the back seat.  I climbed to the back of the wagon, my preferred place to ride, to dig out a spot for me to ride for the next eight hours or so.  Since all of our luggage and other things were in the back where I rode I sort of made a fort of everything.  Back in the 1960s, there were not many freeways for us to travel on so most of the trip was on two lane roads.  We had no cell phones or electronics games, those would not be invented for another 20 years, so books, magazines and imagination occupied our time.  I remember facing the rear window pretending I was flying an airplane.  Another time I had everything arranged where I was sitting in the middle facing forward pretending I was riding a chopper motorcycle.   When the road would turn, I would lean into the turn.  When we took off from a stop light, I would pretend to shift through the gears.  Funny how I pretended to do those things when 50 years later, I have never flown a plane and the only motorcycle I have driven is a Trail Bike, which I enjoy riding today.

Dad told us later that he had taken the station wagon to get it serviced before he picked us up from school.  The guy who checked over the car pointed out how worn out the tires were, Dad told him we would be fine on those tires on our eight hour trip.

One thing I remember clearly is the floor board in front of the back seat was rusted and we could see the road going by under the car.  Dad had cut some plywood to put them over the rusted out floor.  My brothers and I got the bright idea to lift up the plywood and drop marbles out of the rusted holes in the floor.  We would watch out the back window to see where the marbles went.  They could really catch air as they bounced down the road.

As the hours went by, my brother and I always ended up getting into trouble for something.  Of course, it was always their fault.  When the station wagon quickly stopped on the road shoulder, we knew we had to get out for our spanking.  I am so thankful for parents that loved us enough to spank us when we deserved it.  My brothers and I take responsibility for our actions today because of the discipline we grew up with.

As the trip progressed, the day turned into night.  We all fell asleep where we were riding and had full trust in Dad to get us there safely.  One time I recall waking up and seeing that we were stopped at a truck stop somewhere in Louisiana, while Dad went inside for a cup of coffee.  Later he told us that he asked for a cup of coffee, the waitress asked if he wanted to dark kind or regular.  He asked what the difference was. The waitress responded, “You want the regular.”  He did not know about the strong Louisiana coffee called Chicory.

We always arrived in what seemed like the middle of the night.  We all unloaded the car and after a few minutes of talk with our grandparents we were off to bed.

On other trips I recall clearly is Mom reading to us as we traveled.  We listened as she read many different books to us.  One time she read a book called “God’s Smuggler” by Brother Andrew.  I was locked on to what Mom was reading.  It was a fascinating story that we had to visualize in our heads while she read.  Young people today seem to lack the creativity that is produced when you have to see in your mind the story that words on a page are telling.  One time she read about a missionary who drove a VW Beetle through the rough wilderness of Africa.  When the missionary made it to his destination he had a mechanic look over his car before his return trip.  The mechanic said that there is no way that this car will run, the carburetor is so full of dirt, and that he cannot explain why the car even starts.  The missionary said it is a miracle of God since he is on a mission for God.  That has always stood out to me and I think is one of the reasons I like VW Beetles to this day.  I have a ’73 Bug that I enjoy driving.

Looking back at those road trips seem like a lifetime ago, and they were.  With safety such an emphasis today, it is a wonder we all lived through those trips.  Maybe, today we are overly cautious and miss out on such adventures.  I think so.