After saying goodbye to my Irish Friends who were going to hitch up through Serbia to Budapest, I found my way to the train station.  My friends tried to talk me into going with them, but I had other plans.  I wanted to see parts of Western Europe before going to London for my flight home at the end of May. My train to Patras left Athens at 10:45. I was very low on money, almost out so I needed to get to Rome as soon as I could.  My plan is to call home to have Mom or Dad wire money to the American Embassy in Rome.

On the train ride to the western coast of Greece I got to see what I missed earlier since we are now traveling in daylight.  Before long I could sense we were getting close to something since the other passengers were getting cameras out and moving over to the train windows.  Most of my life I have had a camera with me but not always at the ready.  My Dad gave me the nickname “Every-ready” since I missed so many good pictures because my camera and lenses were packed away.  This time was no different.  So instead of missing what we were approaching I looked out of the window instead of digging through my backpack for my camera.  I was not disappointed, we crossed the Corinth Canal.  The train slowed so everyone could get a good look.  The Corinth Canal is an amazing feat of engineering where the Gulf of Corinth and the Aegean Sea are connected for ship traffic.  Sort of like the Greek version of the Panama Canal.  As we crossed the canal I was looking west and could see a ship about a mile away.  He had a tug leading front the bow and I would guess another tug at the stern helping guide him through without hitting the rocky cliffs that were so close that it looked like it was scraping through.  In an instant the ship was out of sight since we crossed the canal.  As tall as that ship was, the shores of the canal were higher.

Not too long after crossing the Corinth Canal we stopped in Corinth.  Now that I have my camera out and ready, I took a picture of the train station in Corinth.

After a rough and bumpy ride (Greek rails are not as smooth as the Swiss rails) we arrived in Patras at 15:00.   The next boat to Italy leaves at 22:00 so I had some time to explore Patras.  I got a locker for my backpack at the train station and started to explore the town but making sure I don’t get too far from the docks.

I got on the ship and found my way to the stern like I did on the Athens Express and it had a big carpeted room where I could sleep. There were a lot of people rolling out their sleeping bags on the floor, so I found a spot and used my backpack as a pillow and covered up under the goat blanket.  I slept well.

I woke up in an Island harbor to a beautiful blue-sky day.  I was invited to eat breakfast with an elderly couple from California.  They paid for my breakfast which I was very thankful for.  I had toast and coffee.  This couple was interested in my journeys and asked a lot of questions. They said at first, they thought I was Swedish or from that part of the world since I had shoulder length blonde hair and wire frame glasses.  They were shocked to hear my Texas accent. I enjoyed my time with them and expressed my gratitude for the breakfast.  They were very nice.

The boat docked at Brindisi, Italy port at 16:00 local time.  I had to adjust my watch minus two hours for the local time.  At the train station which was a short walk away I found that the next train to Rome that stops in Pompei leaves at 22:40 so I had time to explore Brindisi.  I got my train ticket with my EuRail Pass, found a locker for my backpack and went looking for a public phone place called a PTT or Public Phone and Telegraph.  The process for making a phone call to the states is somewhat involved since I had to call collect. I wrote down all the information the Operator needed so she could confirm the answering party would accept the call.  I could listen when the call connected, however.  I found a seat to wait to be called to one of the phone booths, there were about five or six booths here.  The operator behind the desk would keep me updated to where the call is progressing.  After a few minutes she said “…we are connected to Geneva.”  Soon she said, “…we are connected to London.”  Then “… New York.” Not long after she said New York, she said to go to one of the phone booths. The total time to make the call was about 20 minutes.  I went to the booth and picket up the receiver and heard the phone ringing on the other end. Mom picked up and the operator asked if she would accept a collect call from Brindisi, Italy.  Mom said, “Call back, this is a bad connection” I yelled out, “don’t hang up!” Mom then said, “Yes I accept the call” The connection was bad, but I could hear Mom and we were able to talk for a few minutes.  It was so good to hear her voice.  After we ended the call, she was going to the bank to wire $200 to the American Embassy in Rome.

I bought a loaf of bread and two bottles of mineral water with the last of my money.  This was going to have to hold me until I got to Rome.  The train for Rome/Pompei  pulled out of Brindisi station at 22:40. I planned to get off at Pompei, so I knew I had about 5 hours to get some sleep.  Since I had a First-Class cabin, I was able to fold down the seats for a king size bed and it was not long before I was in dream world.

Before I knew it, we were pulling into Pompei station at 05:50.  At the station I tried to buy some pastries using a check, but they would not sell me anything or cash the check since all I had was the one check.  I really did not think they would, but it was worth a try.  At least I could tour Pompei before heading to Rome.  It takes at least 24 hours for money to be wired to the Embassy, so I made the best of the waiting time by exploring Pompei. 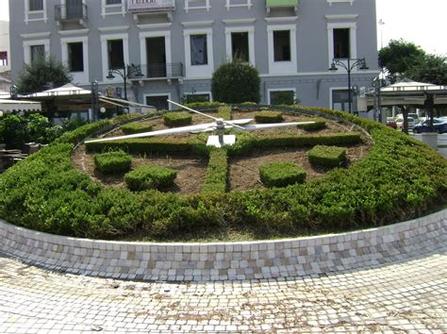 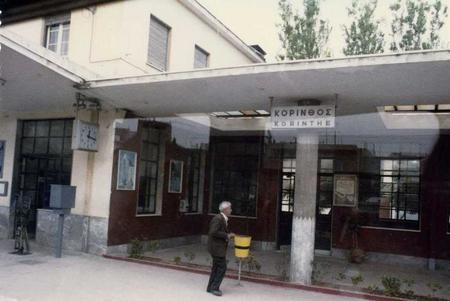 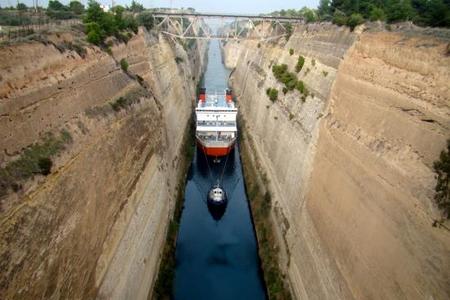 This is a picture I found online, and is basically what I saw as we crossed the Corinth Canal