Easter 1963, we had arrived at my Grandparents house and I was helping my Dad carry things in from the car.  I hear a low rumble from down the highway in front of the house.  I looked to see what it was, all of a sudden a car flashes past and I caught a glimpse of an alien looking vehicle that was beyond cool looking to my five year old eyes.   I turned to my Dad to see if he saw the same thing.  I asked “What kind of car was that?”  He responded, “That was a new Stingray”.  I said, “That is what I want someday!”  He said, “Someday, I hope you have one”.    I will never forget my first sighting of the new Split Window Corvette, I remember that moment 53 years later as if it happened yesterday.  That moment in time which lasted maybe 3 or 4 seconds when the ’63 Split Window Vette went past had such an impact on my life; I became a diehard car guy.

As I grew up I was very aware of new car models.  I remember in 3rd grade, seeing a new 1967 Mustang in the Teachers parking lot.  I had to find a way to go out there to get a closer look even to the point of getting into trouble.  It was worth it. My dream car was always Corvette, but I had an appreciation for anything that had American muscle pedigree.   I was an average teenager making money by mowing lawns for anybody who would hire me.  One Summer mowing our neighbors lawns was just not enough income so I went to a local Real Estate office and made a deal that I would mow lawns for houses they were representing.  I stayed really busy that summer, but I had to rely on family to take my mower and me to the yards to be mowed.  I rigged up a boat trailer to carry my mowing equipment and fuel.

My brother began working on an unfinished dune buggy.  It had the pan and transmission from an early ‘60s VW Beetle.   He had cut out 18 inches behind the driver’s seat and it stayed cut in half for a few years.  He gave the project to me when I was 14 years old.

Around that same time the Meyers Manx Dune Buggies became popular.  I recall my first ride in one and thought “I have to get one of these!”  I researched the Manx kits and knew it was out of reach for me whose only income was mowing grass.  I came up with an alternative; finish the project handed to me by my brother.  The main thing I needed at that time was a good engine and transmission so the best source for that was to buy a complete Bug.  I found a 1965 Beetle and made a deal to buy the car for $150.  I called my Dad at work and asked if he would come home early to sign for the title since I was too young to sign.

The first thing I needed to do was remove the body from the pan.  In our front yard was a large oak tree with thick limbs.  I rigged up a chain hoist and rope from the limb and ran the rope through the open car windows.  I unbolted the body mounts and disconnected everything that held the body to the pan.  It was amazingly simple to pull the Bug body off the pan.  With the body hanging from that oak limb, I pushed the pan with engine and transmission out from under the body.  If I remember correctly, that body hung from the limb in our front yard for several days until a neighbor asked my parents if I could at least lower it to the ground.  They were afraid one of the neighborhood kids would get hurt from it.  Later, a friend of mine got a VW Bug that was in pretty bad shape.  I ended up giving him the ’65 body as long as he hauled it off.  It was gone one day when I got home from school so I am not sure how he hauled off that old body.  The pan from that ’65 Bug stayed in our backyard for years until my Mom paid someone to haul off all the “junk” my brothers and I stored back there.

My Dad, brothers and I got to work cutting and welding pipes to make a cage for the dune buggy.  We used the old project VW pan, with the engine and transmission from the ’65 Bug.  For my birthday and then Christmas, I received car parts for the dune buggy.  I bought the rest with hard earned mowing money.  After a lot of work, it was finally time to test drive.  First we just drove it in the driveway to make sure the brakes and everything else worked.  Most everything did work.  Then the driveway was just too small so after dark we ventured out further and drove a few blocks.  I remember thinking that must be what it was like to drive behind enemy lines since we did not have any lights.  I am not sure why I thought that, but I remember that clearly.

As time went on, the dune buggy was finished out and made road worthy and legal.  When I turned 16 years old, I had my car to drive.  There was no other car on the road that looked like this one.  It had a full roll cage, a rear window from a 1965 Chevy Pickup truck for its windshield and plywood for the front end.  The plywood was added later to cut the wind from blowing on us as we drove.  The plywood could be removed easily which made trips to the beach in the summer more fun.   I had welded an old VW Hub on top of the roll cage to mount a spare tire.

The Houston International Raceway was just a few mile from our house so my brothers and I along with friends were out there as much as possible.  We saw a lot of history made there from Don Garlits AA Fuelers to Jet Cars.  The Winston Nationals were held at that drag strip as well as Spring Nationals.  All the big names of the day in drag racing came here.  We met a lot of the famous race teams as we walked through the pits.

On Wednesday nights they had bracket racing and everyone could race what they had.  One Wednesday night I decided to run my dune buggy mainly to see what it would do in the quarter mile.   The engine was basically stock VW with headers so my expectations were not very high, I just had fun being on the drag strip.  I don’t recall my time but it was not very impressive.  My brothers and friends who were there encouraged me to enter in the bracket racing saying as long as my times were consistent, I might actually take home a trophy.  Since I don’t recall the time I ran, let’s say it was 18 seconds.   For the rules of bracket racing at that time I would put my time on a side window, and in my case on the passenger side of the windshield.  As long as I did not go any faster than the time I dialed in and still beat my opponent I would move closer to the finals.  The car that was to be my first challenge ended up being a 1962 Corvette that had a 454 big block.  I could hear the cam thumping through his open headers as he came up to stage. I knew he had lots of go fast parts in that big block.  Whatever time he “dialed in” was on his passenger window and was a lot more impressive than my time.  I was in the right lane so the “Christmas tree” lights started down on my side and when it hit green, I took off giving everything the dune buggy could do.  I was about halfway down the track before the Vette got his green light.  I could hear his big block screaming trying to catch up.  I kept my gas pedal all the way down trying to gain all the speed the bug engine could produce.  The finish line was close when I heard the Vette hit fourth gear.  I knew it was going to be close at the line.  I crossed the finish line going a little over 80 miles per hour and was two feet ahead of the Vette.  He crossed the line at 140 miles per hour.  I took the win!!

Driving on the return road I could hear the cheers from the stands as I passed by.  The Vette was behind me as I turned into the pits.  He was not a very happy camper; he was just eliminated by an almost stock VW dune buggy.  That is life in bracket racing!  I lost my next race so I was eliminated.  My go for a drag racing trophy in a dune buggy was now history.

As the years go by, I had my share of muscle cars and I did get my Corvette in 1985 which I still have to this day.  It is a 1978 L-48 which is now undergoing a frame off build.  I say build since it is not a restoration, but a Resto-Rod Build.  Since it is an L-48, which is the base version with nothing special about it other than it is a Silver Anniversary year model, I decided I wanted to build it into a Big Block Street Bruiser.   As life responsibilities hit, money for the project is a little at a time, but still ongoing.  I look forward to the day I can drive the Vette again. 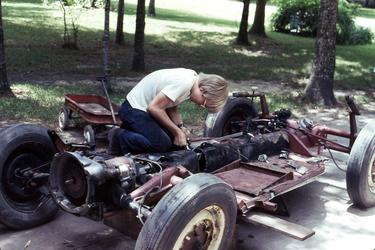 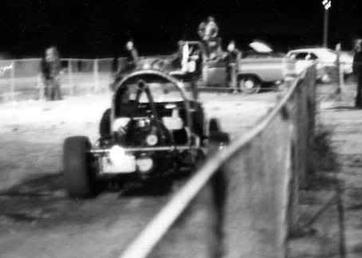 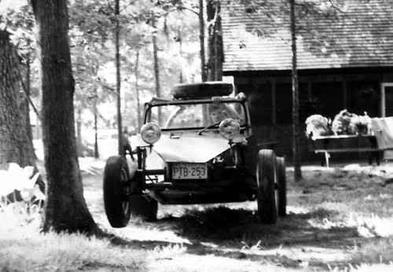