Road Trip in a Muscle Car
Back to Driveway Stories Archive 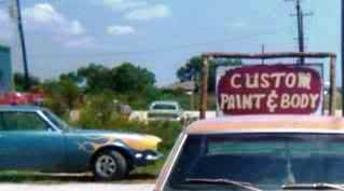 In 1973, my parents rented a building for my brothers and me to run a car repair/body and paint business.   The original name for our business was “Precision Automotive”.   We later re-named the business to “Overton Brothers Custom Body and Paint”.   We had built up a good business, which lasted for about 3 years.  The failure of the business was due to my brothers and I put our own cars as priority over the customers.

During this time a customer had brought in her 1968 Camaro for repair, but it needed so much work that we did the minimum just so she could drive it.  That was all she could afford.  When she paid her bill, I made the comment that if she ever wanted to sell it, let me know, I was interested.  A few weeks went by and she showed up at the shop and asked was I serious about buying the Camaro.  That was music to my ears!  By the end of that day, I was the proud owner of a 1968 Camaro that had a 327 and a 3 speed manual.

The 1968 Camaro became my test mule for several different engine and transmission combinations.  The M22  4 speed I had bought ended up staying in the car the longest since it was bullet proof; It held up to any horsepower I put through it.  The Camaro had Chevy small blocks as well as big blocks between its fenders at some point in the 5 years I owned it.  The original 327 which was modified for more horsepower ended up being the most reliable.

As soon as school let out for the day, we were back at the shop working on customer cars as well as the important task of keep our car running and looking best.

While I was in high school, my Camaro had several different paint schemes; one was a light blue with flames.  We had several customers who wanted flames painted on their cars so we used my Camaro to figure out how to paint flames.  The last paint scheme I had was a darker blue with white Z/28 stripes.  I really liked how the stripes turned out.  Only the real Z/28 connoisseurs could tell they were not factory.  When graduation came for me in 1977, I was more than ready to be done with high school.

The one thing I wanted to do once I graduated was to take a road trip in my Camaro to see relatives.   For graduation, my parents gave me use of their gas card and some money to take this trip.  All of my relatives at that time lived in Arkansas so I packed up the Camaro with all the tools I thought I would need along with some spare parts and a backpack of clothes.  I took off for the first leg of the trip; my Grandparents house near Pine Bluff, Arkansas.

For this part of the trip I settled in for the 10 hour drive.   The Camaro did not have air conditioning so the early summer air was hot.  I had both door windows down which helped to keep the air a little cooler.  With the windows down, I could hear the loud exhaust just under the floor boards.  The exhaust system consisted of headers and bolted on thrust mufflers with no tail pipes.  As long as I was moving, the exhaust smell was not too bad, but driving through the small towns of Texas, Louisiana and then Arkansas, there was a lot of slow going which allowed the exhaust fumes to creep in.

I made it to my Grandparent’s house with no problems.  I stayed there a day or so before I was itching to get back on the road.  Most all of my cousins lived in the Ozark Mountains in a town called Mountain View.  Driving the Camaro through the mountains was a blast for me.  I am used to driving the flat roads of the Texas Gulf Coast.  The wide tires, posi-trac rear end and the 327 putting out about 400 horsepower along with the close ratio 4 speed made driving the mountains a fun time I will always remember.

One day while in Mountain View, my cousin Alex and I went to the local caves called Blanchard Springs Caverns.  The Caverns had recently opened to the public and I wanted to see what they were like.  We all knew about the caves, but unless you were a trained spelunker, we could not see what they were like inside until now.  The roads leading to the caverns had not been paved since they were new.  The drive on the hot cloudy day was dusty from the dirt roads.  The tour throughout the caverns was fascinating.  As the elevator doors opened in the lobby of the tour facilities we noticed that the weather had turned into a driving rain.  We left the parking lot and started driving on the dirt roads which had turned to mud.  At first it was fun since every time I shifted gears, the back end of the car would go sideways in the mud.  We eventually came to a hill that was a steep climb for almost a quarter mile and there were tow trucks at the bottom.  We stopped to talk with one of the drivers to find out what they were all doing there.  He said that since the road had turned to mud, no cars could make it up the hill without help from a tow truck.  About that time a four wheel drive truck started up the hill so we watched to see if he would make it.  He was barely moving by the time he made it to the top but he did make it.  The tow truck driver smiled and said there was no way I would make it in the Camaro.  I asked how much he charged to pull me up the hill and he replied, “40 dollars”   He might as well said 400 dollars since I was counting every dollar on my trip.  Also, since he said the Camaro would not make it, I saw that as a challenge!  I turned around to go back down the road about a quarter mile, and then did a u-turn to face the hill.  I told Alex to buckle his seat belt while I was fishing for my seatbelt from under the driver’s seat.   I took off in first gear trying not to spin the wheels so I could build up as much speed as I could.  Second gear and third gear, the back of the car would fish tail because of the posi-trac rear-end.  I hit fourth gear about 100 yards from the base of the hill; we were moving about 50 miles per hour.  As we passed the tow trucks, I could see the drivers watching us with interest.  We started up the hill and it was not long before I had to drop back to third gear.  When I went to third gear the car started fishtailing and throwing mud from both rear wheels.  About halfway up the hill, I was moving about 25 miles per hour and at that time I had to drop back to second gear.  I could hear Alex laughing; I was having fun too.  Before long I was back in first gear, throwing mud everywhere with the top of the hill in close sight.  We kept moving but at just a few miles per hour at the top of the hill.  We cleared the crest of the hill and not a moment too soon, the momentum was exhausted.   Alex and I had fun telling our family our afternoon’s adventure.

When I left Mountain View a few days later, I headed North West to visit Eureka Springs, Arkansas.  Eureka Springs is a wonderful old town to visit.   I also visited a college in Siloam Springs, Arkansas which I ended up later attending; John Brown University.    One day as I was driving through the Ozark Mountains of North West Arkansas, I stopped for gas at a little mom and pop gas station which was also a small store.  That stop was interesting in that those folks had not seen a car like my Camaro in person.  As I was filling the tank, one guy walks up and started asking questions about the Camaro.  Before I left, I had the hood up and talking with several guys about what I had done to the engine and how it performed.  I must have stayed there almost an hour talking with the local folks about the car and them showing me their cars and trucks.  It was a fun time that I remember fondly.

Later that week as I made my way back home, I hit the flat plains of Texas wishing my air conditioner worked.  The noise, fumes and heat which at the time seemed uncomfortable, I now recall as fond memories.  Sometimes wish I could re-live those days.

Today, my wife and I talk about buying a Corvette at the Corvette Museum and driving Route 66.  I really hope that one day we can afford to do that and take the time to enjoy such a trip.