Tales of the Red Rag 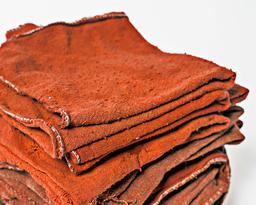 As I was driving the other day I saw something on the road. The closer I got to it the more I recognized it; it was a red mechanics rag. I have used rags just like this one most all of my life. In fact, I have a trash can full of them in my garage that I need to wash again. These rags always end up in my rear pocket as I am working on the latest project. In my younger years, I had them as I worked on lawn mowers, go karts and my first car, a dune buggy. I have had them around ever since.

While I was in High School, I worked for an Auto Parts Store. My job at the store was stocking parts and driving a van that delivered parts to local businesses. Even though I was not working directly on greasy engine parts at that time, I had a red rag with me to wipe my hands as I worked through the day.

When I started working in the ship yards, the grease factor went sky high so carrying red rags was a necessity. I worked on diesel engines of many types as well as the truck engines that kept the ship yard moving. Working down in the engine rooms of the tug boats was hot and greasy, but I loved every minute of it. Funny how time seems to erase the bad and the good gets better. There were not enough rags to keep us clean as we worked endlessly to keep the boats moving.

One year there was a goat that lived at the shipyards that we named Benson. Benson followed me around everywhere, so I would tie a couple of red rags around his neck for when I needed to wipe my greasy hands. I would call Benson over and use the rags around his neck. At the end of the day I would take the rags off of him and throw them away. I really liked Benson. I would climb up on a barge to check out the pump engines, I could hear his hoof feet clicking on the steel deck as he followed me. I would jump onto the tug boat and climb the steep stairs to the wheel house, Benson would be right behind me climbing like a mountain goat. Then one day I had to go to Corpus Christi, Texas to work on a boat, I was there for about four days. I came back and could not find Benson anywhere. I asked around and one of the other yard workers said that he tasted really good. While I was gone, the other workers cooked my goat and ate him. I was devastated. I have wanted another goat ever since.

Not long after that a young Black Labrador Retriever started hanging around so I started to feed him and he became my new best friend. I tied red rags around his neck and he would always be there like Benson was. That black lab would ride the tug and barges with us from time to time but he mostly lived out at the ship yards. Anytime I needed to wipe grease off of my hands I would call the lab over and use the rags I had tied around his neck. One time I had to go into town to the auto parts store and as I was driving out of the yards, that black lab jumped onto the back of the flat bed truck. He did not have enough sense to ride close to the cab, but would sit near the back. As I left a red light he fell off, he got up and ran after the truck. I pulled into a parking lot and he jumped back on to the truck. I had to watch how fast I pulled away from a stop so he would not fall off again.

At the end of the summer before going back to college, I said bye to my good friend the black lab, and I never saw him again. He was a good dog.

After college I started my career in Television Broadcast Production and I never had a need to carry a red rag at work. Today I work in Executive Support and A/V so again, there is no need for red rags. Once I get home however I have my car projects so the red rags were never far away. Most every time I am at the parts store I will buy another bag of red rags, because you can never have too many.

Recently after working on our cars I have left a red rag in the intake when I put the air filter back together. In my daughter’s Jeep, I put a rag in the intake to keep dirt out while I worked on the engine. On the test drive I could not get the RPMs below 3,000. I could not figure out what might be causing this. When I got back to my driveway, I pulled the air cleaner off and found the red rag down inside the throttle body holding the butter fly open. A couple of years later I did the same thing on my wife’s van except the rag went deeper into the throttle body. It took some effort to get that rag back out.

My garage dog, Axle, loves red rags. He will steal one and chew on it all day. I have to watch him because as I walk past, he will steal a rag from my back pocket and run away. I have fun with Axle trying to get my rag back. I always grab a clean one and give that to him as a replacement for the greasy rag. I guess I named him well since he likes to be around grease. His full name is Axle Grease Overton.

Funny how a red rag blowing along the road made me reminisce about all the red rags I have carried throughout my life. Before writing this, I did a search to find out why they have always been red, but I did not find that answer. I guess they have always been red because the first ones mechanics used were red and that set the standard. Oh well, I have to go to the parts store for some parts and I better pick up another bag of red rags.