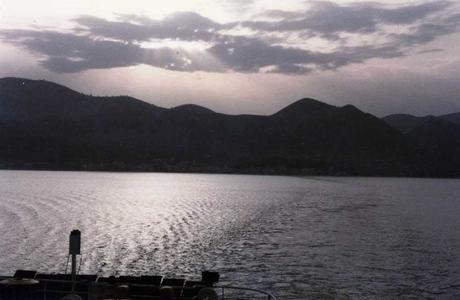 On the way to Patmos 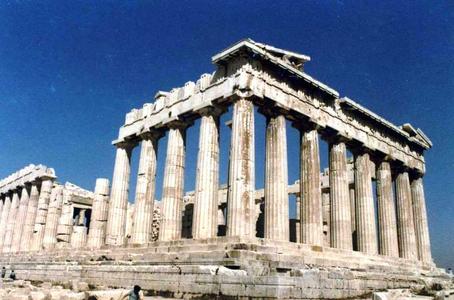 I got on the next train to Athens. The train pulled out of the Rome Station just as it started raining. I looked at the passing ancient city as we headed south. I saw the top of the Coliseum in the distance and thought that I look forward to exploring that area of the city. Due to the train’s rhythmic motions, it was not long before I fell asleep. I woke up as the train slowed, I could not see much through the window but I saw lights in the distance. We pulled into the station in Brindisi, Italy. As I left the train, I followed the crowd to the dock where there was a ferry waiting for us to board. The Eurail Pass got me a base ticket so for a few dollars I upgraded for a sleeper cabin since we will be sailing over night to Patras, Greece. The cabin was basically a bare room with about eight bunks. I was one of the first ones in the cabin, so I picked a lower bunk, where I could store my backpack underneath. For a communal sleeping arrangement, I slept really well.

The ship’s horn woke me up, so I got up to see where we were. We were pulling into a harbor and it was WARM. I have been cold since I arrived in Europe. The morning sun felt so good and the harbor was gorgeous. I did not want this moment to pass. In my journal I described the harbor as ‘paradise’. Greek time was 2 hours ahead of what my watch showed so I adjusted to show the local time. I found out the harbor where we were was Corfu, Greece. This was not my stop so I watched from the railing as we docked then pull away about an hour later. My stop is Patras, Greece which is several more hours away.

We pulled into the harbor at Patras at 18:00 (6:00 pm) local. I was on the boat for 20 hours, but it was so good to be in the warm sun. Once on land I went to the train station and caught the 19:20 train to Athens. One noticeable difference between the Greek trains and the mainland Europe trains is first class here means you get a padded seat instead of a wooden seat. On the previous trains first class means you get your own cabin. Another difference is the train seemed to stop for pretty much any reason, even when the engineers wanted to say hi to someone on the side of the track. I was sitting across from a guy named Alex from Los Angeles who was also traveling alone, he would say, “I bet there is a lizard on the track”. One of the things I wanted to see was the Corinth Canal, but it was too dark to see much of anything.

The four-hour trip from Patras to Athens seemed longer than it really was because of all the stops and the fact I was getting really tired. We pulled into the station in Athens at 23:00. As I walked away from the train, I was at a loss as to where to go at first. A guy walked up to me and handed me a flyer for a Youth Hostel. It was for 70 Drachmas a night, which is about four dollars. He said in perfect English, “Since you are a foreigner we can help protect you. We can keep your passport in our safe in case people stop by to look for Americans.” I was cautious but put my trust in him. He led a small group of us who apparently were traveling alone or in twos. Since there were these other people I felt like this was the safe thing to do. The guide told us of roving gangs in the city looking for lone travelers, especially from the West. He did not go into what would happen when they found one however, but I could imagine.

When we got to the Hostel I checked in, handed over my passport and watched as they put it in the safe. I went to my assigned area which was just a cot among a small sea of other cots. I slept well.

The next morning, I woke up and checked out of the Hostel. When the guy handed me my passport, he advised that I go to the port and catch a ferry to an island until the May Day stuff is over which would be about a week. I went to the train station since that was the only place I knew here in Athens and rented a locker for my backpack. I picked up a local map and found my way to the Parthenon. It was a long walk, mostly up hill, but the sights were rewarding and amazing. After spending time looking around, I knew I needed to get to the port soon to catch a boat. After picking up my backpack from the train station, I found my way to the port.

At the ticket counter I asked for any island that was not communist. When the ticket agent saw my passport, he said there is one island where you can go and that boat leaves at 14:00. I looked at my watch and it was 12:45 so I knew I had better take that ticket. I paid $9.00 for the ticket since my Eurail Pass did not cover ferries going to the Greek Islands. When he handed the ticket to me, he said to be sure to get off the boat at the correct island, this is the only one on the route that is not communist.

I found the boat and boarded. This ferry had an area that has seats sort of like an airline. I found a seat at the front so I could keep an eye on my backpack in front of me. When I bought the ticket, I did not pay attention to the name of the island, so I looked to see where I was going. The island was called Patmos. There will be two stops before we get there. As the ferry pulled away from the dock and we got to open water, I pulled out my Bible to read. I had been reading through the Bible and was just starting in the book of Revelation. When I read 1:9, it said, “….was on the island called Patmos….” I was shocked. I looked at my ticket and it said Patmos. I was almost overcome with amazement in how God not only protected me the last few days, but where He was sending me to rest. 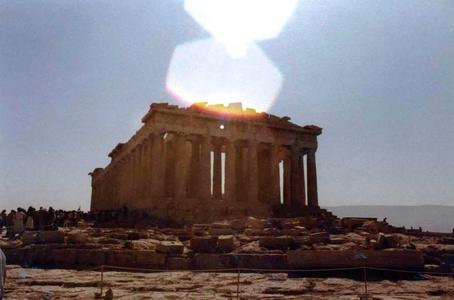 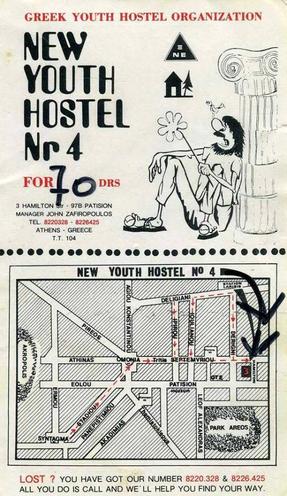 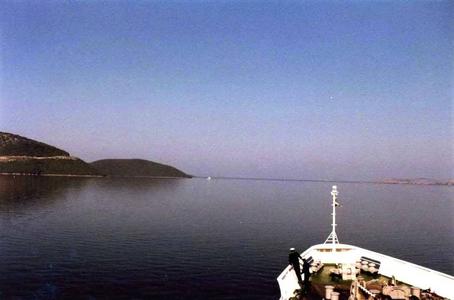