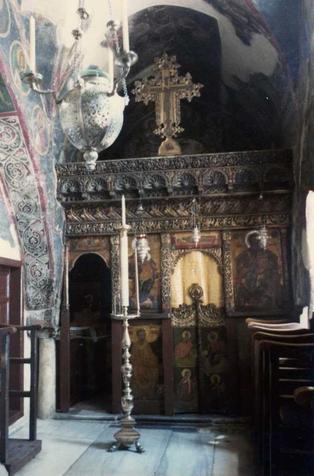 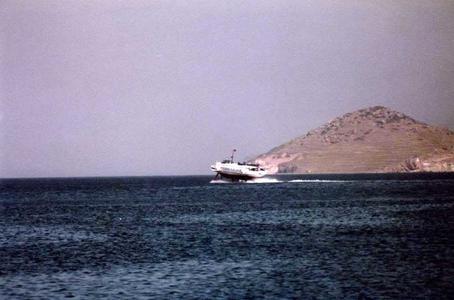 The boat arrived at Patmos at around midnight local time. As I left the boat and walked towards the buildings near the dock, a young boy about 10 years old asked if I needed a room. I said I did so I followed him about two blocks to a small hotel that was only about four rooms. His family owned and operated the hotel. When you walk in, the center part of the building was an open courtyard and the four rooms were on each corner. Two rooms shared a bathroom. I never saw anyone in the bathroom near my room so I guess the other room was vacant. This the first room I have had to myself since I stayed in Geneva when I arrived in Europe. Nice and quiet. I slept well that night.

I woke up around 09:00, walked to the only place I knew which was the ships dock. I saw there were a couple of outdoor cafes nearby so I went to one to get some breakfast. Money was getting low so I had a toast and coffee for breakfast. I am a picky eater so I was good with eating very little. The whole atmosphere of the island was a nice change from the cold snowy Alps of Switzerland.

Later that morning I walked along the road to the monastery at the top of the hill, really a small mountain but compared to the Alps, it was a hill. I was enjoying the warm sea air but was glad to finally make it to the top. I was looking forward to touring the monastery. When I tried to enter, I was turned away since I was wearing short pants. I was disappointed. I took my time walking back to Skala, the town at the harbor where I was staying. I stopped at a small store to buy some snacks to keep in my hotel room. I also bought a can of Greek honey, good stuff. I put a pair of jeans in my day pack and went back to the monastery. I changed into the jeans when I got there so I could tour the Monastery.

Walking through the monastery seemed like walking on holy ground. The entire place seemed so reverent and the smell of incense was everywhere. They had some really old pages under glass that they claimed were original writings of the Bible. There was a part of a page of Job and from Mark.

That afternoon I was at the outdoor café enjoying a shish kabob with lamb meat. This is the first meat I have had in a long time, which I really enjoyed. While I was there I had a clear view of the dock and a Soviet Hydra Plane pulled in to drop off and take on passengers. After I finished eating I walked over to it for a closer look. It was interesting to see the hammer and sickle red flag on its mast. I stayed nearby to watch it leave port. It was cool to see once it cleared the harbor it planed out on top of the skids.

I spent the rest of the days on Patmos exploring the island. There were a lot of goats and sheep roaming around. You could walk a short distance and be away from everything man made. When I got out of sight of roads and buildings, I got the feeling of being the only one on an island where I could see far out to sea. That is the only time I can recall feeling so alone with no people in sight. Another interesting thing is there many small one room ‘monasteries’ all over the island. These structures were not much bigger than a small apartment. I guess over the years people would sort of “exile” themselves like John was.

Being on Patmos was relaxing. There was not much to do but to just hang out and watch people. Cruise ships would dock and the place would be crowded for a few hours then everything would be quiet again when the ships would leave. While at the outdoor café where I ended up spending a lot of time watching ships and boats come and go, I met a small group of people about my age from Ireland. They had been staying on one of the beaches for several weeks when I met them. I was talking with one of the guys and I recall him showing me his passport. In the picture of his passport he was wearing a suit and tie. In his thick Irish accent he said, “I use to be respectable, now I am not” He seemed to be proud of that fact.

I found out when there was to be a boat going to Athens the next day called the Athens Express. I bought a ticket. I paid $10, the base price just to get on the boat since I was running really low on money. The day before I was scheduled to leave, I bought a blanket made out of goat’s hair for a few dollars. I bought this since I knew I was going to sleep out on the deck of the boat.

I got up the day I was planning to leave and checked out of the hotel. The bill was 300 drachmas or about $18. Not bad for four days. When I boarded the Athens Express I went to the stern of the small ship and found a place to put my backpack. This is where I was going to spend my time on the journey to Athens. It was just outside the eating area. I saw the group of Irish that was on the island so I went over to talk with them. They paid $12 to be able to stay inside the eating area which had AstroTurf on the floor. They had been on this ship before and knew that this was better than being outside for the entire ride. The ship pulled out of Patmos harbor at 21:00 on a Sunday night. I settled down using my backpack for a pillow and the goat hair blanket to keep the wind off.

During the night it started raining so I grabbed my things and went inside the eating area where the Irish group had settled down. One of the ship’s crew saw me there and knew I had bought only the $10 ticket came over and said I could stay there but if the rain stops I had to go back outside. I was good with that.

I woke up to a lot of noise and the sun was shining. The breakfast line was open and people from all over the ship were lining up. The Irish group got in line and motioned for me to get in line with them. I went over there and said that I really don’t have money to spend on breakfast, what little I had needed to get me all the way to Rome. The one who “used to be respectable” said, I will show you how to get a free breakfast. I followed him away from the line. He said the trick is to get in line behind a rich old couple from America. We saw just the right couple and got in line behind them. As we went through the buffet, he said to get something like and apple and put it on your tray and make sure they see you do that. Then put it back. Grab something else and again put it back. Eventually they will ask, usually the lady, “Aren’t you going to eat something?” Tell them you have no money and most times they will buy you breakfast. I did what he told me and it actually worked! I had chocolate milk and an apple for breakfast that morning.

We arrived at Athens at 08:30. I said good bye to my Irish friends and found my way to the train station. With the EuRail Pass I could board trains and boats for free from now on. At the train station I had to wait only 15 minutes for the next train to Patras. 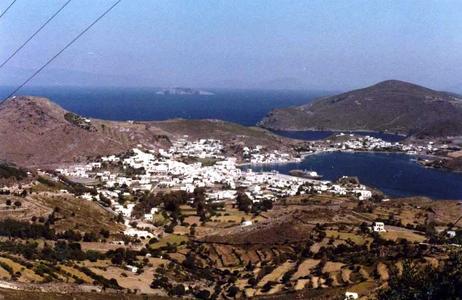 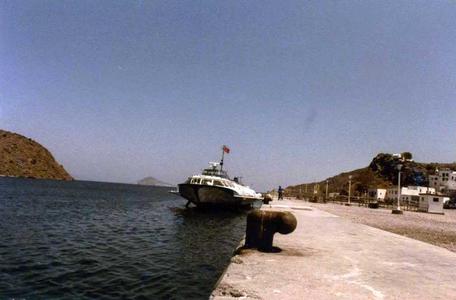 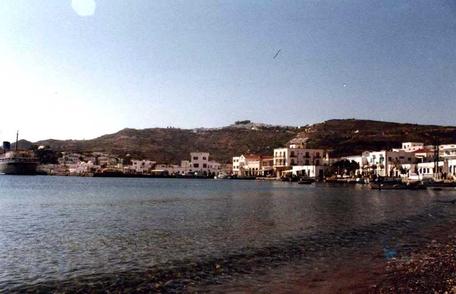 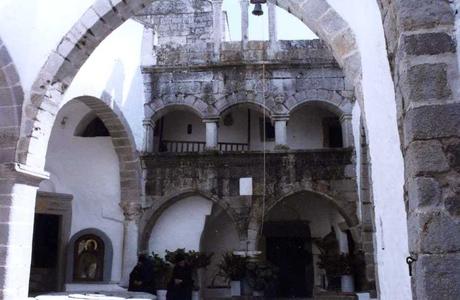 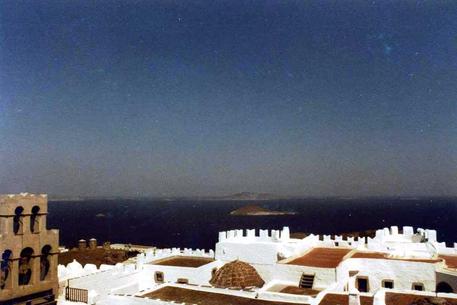 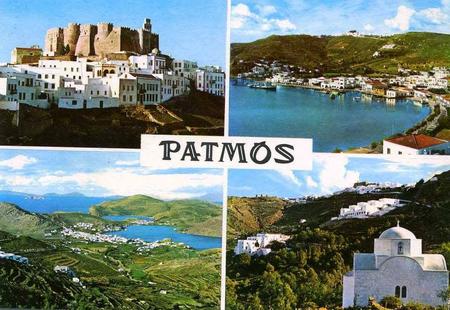 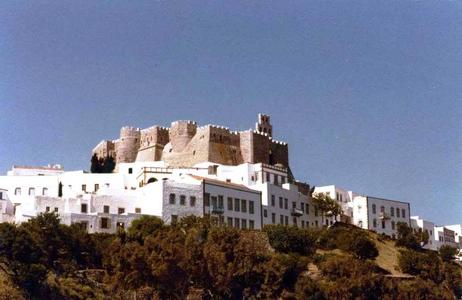